Every writer likes positive reviews. One of my most complimentary came from people in Cambodia who liked my book so much that they pirated the book, printed it poorly, and sold it on the sidewalks of Phnom Penh. I appreciated their enthusiasm, but it definitely did not help sales.

But the most flattering review of all came from the heroine of Cambodia and the Year of UNTAC, Sovan, who will never know how tightly she held my heart in her hands from the time she received the book until the time she told me in a postal letter that she liked it. Later she told me that she had stayed up late two nights in a row to read it.  Now, these many years later she apparently still likes the book, which is why she wrote a long piece for the afterword in this edition and gave me permission to put her picture on the cover. Thanks, Sovan.

Four other reviews, all of which are below, have special meaning for me.

Farang  Magazine is geared towards tourists in Thailand. Because so many “travelers tales” are printed in Bangkok, a book has to be special to stand out; apparently, mine did.

boring and poorly written, Tom Riddle’s keeps the reader flipping the page well after lights out. It follows the author, who joins UN Volunteers and is sent to Cambodia to help people use computers during Cambodia’s first election in living memory. Once there he has adventures in the countryside, hangs out in Phnom Penh, and ends up supervising a data-entry center.

Lacking Cambodia’s usual suspects of guns, girls, and ganga, the book’s value is in Riddle’s humor and observations on the inner workings of the UN’s largest-ever project.  There is not much dialogue, but it is hilarious for its staccato delivery and dry wit.

Once the scene is set, the book starts to heat up as the story moves closer to the election date and Riddle’s relationship with Sovan, a returning Khmer, spirals closer to its climax. The writer’s knack for storytelling and expert pacing makes Cambodia and the Year of UNTAC a great read until the last page. Definitely worth picking up.

The man wearing the blue T-shirt wrote the next review. To his right is Sovan, to his left a staff member, Euro, and then me. I don’t know who took the picture, but it was taken in 1993.

5.0 out of 5 stars – This is a droll insight into a country reeling from war. 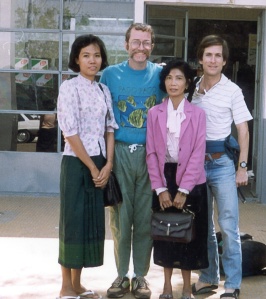 juncture in history. As far as I know, all that he wrote was true. As a minor character in the story, slightly disguised, I was able to see some of the same world that Tom Riddle saw while I was working at another humanitarian relief agency in Cambodia. Riddle examines the very nature of reality as he probes this isolated peasant society, plagued by war induced poverty and destruction, and overlaid with the sudden arrival of a weakly organized UN military and technical support force of around 20,000 people from many different countries.
Riddle taps into many different realities as he looks at the worlds of a myriad of different characters trying to make sense out of the chaos they are experiencing. It is offset with his own ironic humor, personal life crises, and the participant-observer perspective.
The idealism of the United Nations is a paradox of its inefficiency, political agendas, and bureaucracy. You get an international version of “Catch 22” in this book. The career bureaucrat is offset by the author as the naive idealist. The brave young Cambodian woman recovering from war and life in a refugee camp is struggling to help her family survive and save her country. She is offset by the romantic notions of the author, hopelessly in love with her. Peaceful interludes of Cambodian life are interspersed with violence and disarray. The oppressed Cambodian society seeking to find itself is continuously falling back on the international community and even the traditionally adversarial Vietnamese population for energy and direction.
This nonfiction account of social chaos reads like a lighthearted Franz Kafka. It transcends the war journalist’s perspective that is our usual source of information about social crises such as these. As a participant-observer in life’s international fast lane, the author is able to bring unusual insight into unusual life experience. Whether you seek information about Cambodia, the United Nations, the impact of war, a good adventure story, or a cross cultural perspective on human relationships, you will find this fascinating reading.

I didn’t know John Marston, but he worked for UNTAC at the same time that I did.

Inside the United Nations’ 1993 Election
Book review by John Marston

(Pacific Affairs Vol. 72 No. 1)
This book, a memoir of the U.N. presence in Cambodia in the period leading up to

the 1993 elections, is written for a popular audience. On its own terms it works – the question being, what are those terms?
Riddle is an American who taught English in refugee camps in Thailand and later did graduate work in anthropology at the University of Hawaii. The book recounts, from a very personal perspective, his experiences from March 1992 to July 1993, working as a United Nations Volunteer (UNV) for the Electoral Division of the United Nations Transitional Authority in Cambodia (UNTAC). UNV’s were known within UNTAC for being motivated by idealism and for the long hours they worked at low pay. Riddle worked with computers in the UNTAC electoral headquarters. (I also worked for UNTAC, in another division, but never had contact with Riddle.)
In the ‘grand tradition’, Riddle’s relation to Cambodia is embodied in his love for a beautiful woman, a thirty-year-old Cambodian co-worker; Sovan, who had recently come from a refugee camp on the Thai border. Sovan, as an icon of purity, elegant and aloof, is held up in contrast to the loose morality of many UNTAC staff, and to the prostitutes of Thailand and Cambodia, whom Riddle describes in fascinated detail, but never touches.
This story unfolds against the backdrop of the UNTAC period. Simply in terms of recounting a basic narrative of that period, Riddle’s book is perhaps the most successful I have read so far. Clearly and dramatically, he retells the sequence of events and the popular moods associated with them, as they were perceived by many of us working in Phnom Penh. As he readily acknowledges, much of what he knew about what was going on in the country was gleaned at the time by reading the English-language newspapers, the Electoral Component newsletter, and other reports.
Take away the love story and the second-hand historical narrative, and Riddle is mostly in a position to report on his experiences working with UNTAC computers. This is not totally without interest. There is no little irony in the idea that the U.N., at great expense, was willing and able to superimpose the theater of its high-tech election on a low-tech country. Riddle writes about his experiences with wit and narrative flair, but this in and of itself would not be enough to sustain the interest of the book.
Cambodia and the Year of UNTAC is a much better read than the book it most closely resembles as a popular memoir, Radio UNTAC of Cambodia, by Zhou Met (Bangkok: White Lotus Press, 1994), although Radio UNTAC probably provides more information that would be useful to future historians. (Neither of these books represents the ambition, in terms of political and social analysis, of a book like Propaganda, Politics, and Violence in Cambodia, Steve Heder and Judy Ledgerwood, editors [Armonk, N.Y.: M. E. Sharpe, 1996]—a collection of articles by people who had worked in the: UNTAC Information/Education Division —in effect a totally different genre.) Cambodia and the Year of UNTAC is rather an efficient summary of the kinds of things that journalists were writing and people in Phnom Penh were talking about at the time but is not a source of much new information or a new synthesis of the old.
Much of the effect of the book depends on its tone of hip irony. This, with its frankness and humor, is both its strength and its weakness, in that it ultimately serves to keep the country and the events happening in it at arms’ length.
I found myself liking the persona of the author and cannot judge too harshly a book that successfully evoked my own memories of UNTAC. Nevertheless, I cannot help wishing that Riddle or his editors had pushed a little harder to move beyond the limits of the genres of travel writing and popular fiction within which the book is framed. Would I assign this book for a class on Cambodia? Probably not. I would recommend it for reading on the plane or between swims on a beach in Southeast Asia somewhere other than Cambodia.

Thomas Grace wrote the definitive book, Kent State: Death and Dissent in the Long Sixties, pictured below, about the shootings at Kent State University on May 4, 1970, five days after the U.S. invaded Cambodia. 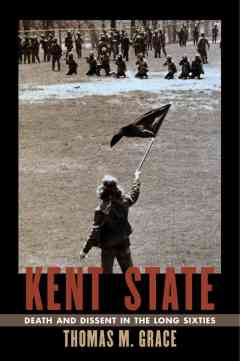 It cannot be said that expatriate author Tom Riddle was born to write a book about the 1990s UN run election in Cambodia, a plebiscite in which he participated. Yet, serendipitously, he was born in the right place. When Riddle was but nine-years-old, then Cambodian Head of State Norodom Sihanouk visited Riddle’s neighboring community of Kent, Ohio, where, in 1970, four students were shot to death in protests sparked by the US invasion of the Southeast Asian nation following Sihanouk’s ill-advised overthrow. Still too young to have participated in the demonstrations, Riddle started at the nearby university months after the killings. There he became something of a fixture in Kent State’s burgeoning antiwar movement, a movement in which this writer also played a role. Twenty-years after he began his youthful activism, Riddle landed in Cambodia where he used his computer skills to help the United Nations Transitional Authority (UNTAC) administer the country’s first, and sadly, only free election.

When I first read the book over fifteen years ago, it immediately became apparent that Riddle had accomplished what no other author writing about that war torn nation had done: he brought welcome humor, albeit of the black variety, to an otherwise decidedly and deeply depressing subject. I never made it to Cambodia, although I know other historians and writers that did, George Hildebrand and Steve Heder among them. While there are many worthy books that explain Cambodia’s descent into dystopian darkness and that assign responsibility for the fall, Riddle’s book is different, very different. He is unafraid to expose his frailties and completely willing to poke fun at himself and others.

His well-told tale reveals a good deal about the vices brought to Khmer society by western influences, enlightens readers as to the virtues of Cambodian mores, and tells of his romantic connection with Sovan, the embodiment of what had been the country’s traditional way of life. Though he is reluctant to do so, Riddle manages to take some small credit for bringing a moment of good order to a nation wracked by death and strife. In a more lasting achievement, he also provides his readers with a remarkable book.