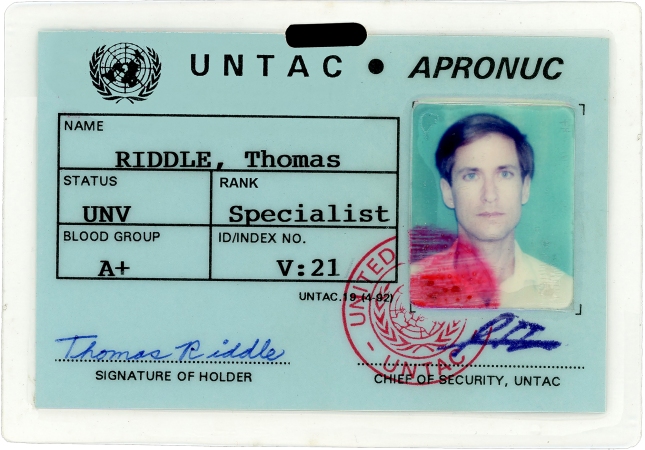 The publisher asked me for a little bio for the book. This is what I wrote:

Tom Riddle is from a small town in the American Midwest. As a university student, he participated in countless demonstrations against the Vietnam War. Inspired to do good, upon graduating he joined the Peace Corps and served four years in the remote Tongan Islands of the South Pacific. In the early 1980s, as hundreds of thousands fled the war-torn countries of Southeast Asia, he was curious to meet the people he had heard so much about and spent four years working in the refugee camps of the Philippines and Thailand. In 1989, he received a master’s degree in anthropology from the University of Hawaii and taught school for several years. Then in 1992, he joined the United Nations Volunteers and went to Cambodia. These days he makes movies and divides his time between Asia, Europe, and a small town in the Midwest.

Over a two-year period, just after I left Cambodia on July 25, 1993, I wrote Cambodia and the Year of UNTAC. I had originally planned to go backpacking in New Zealand, but once I arrived in Thailand I realized that the best thing I could do was stay in the same lovely small Thai town where I had lived in the early 1980s, Panat Nikhom, and write my heart out.

Eating breakfast in the Panat Nikhom Refugee Processing Center in 1983

Just outside of town was the Panat Nikhom Refugee Processing Center, where I had worked almost a decade earlier. “The Camp” was still there, as were many of my old friends.

When I arrived someone told me that I didn’t look so good. That’s true. I was traumatized by some of my colleagues getting killed, a romance that still haunted me, and the loneliness that people feel when they leave good friends in a perilous situation.

The hotel that I stayed in rented rooms for three dollars a night. Three dollars got me one of the two rooms on the top floor. The other room was empty except when guests would stop by for a few hours with women who were either girlfriends or prostitutes, depending on who you talked to. In the middle of the day my room became unbearably hot, so I would always go somewhere—to get something to eat or to visit friends. But every evening I would buy a large bottle of beer, take a shower, and sit at a little metal table for a few hours to write. After that, I’d go out for dinner. In the morning, I’d proofread what I had written the night before or fact-check something in the library of the office where I used to work.

If you think too much about the two decades of Cambodian history before the United Nations arrived in 1993 you can get very depressed. I mean seriously depressed. And even after the UN arrived some very terrible things happened in Cambodia. And yet the Cambodian people always seemed to be willing to laugh—as if to say that no matter what happens in life there is always room for some humor.

Take, for example, the most popular man in Cambodia in the last century, Prince Sihanouk—he always had room for humor. If you ever see his picture he is probably smiling. He had the weight of millions of tragedies on his shoulders and yet he was usually smiling.

Sovan, the heroine of the book, also had a sense of humor, and when I met her I instantly spotted it. She made me feel like I was the funniest man alive.

I like to think that at least some of the humor I saw in Cambodia stayed with me with me as I wrote the book. But even then, if I thought I was getting too serious, I’d go back and read a little from two of what I consider to be the modern masterpieces of literary humor: Kurt Vonnegut’s Slaughterhouse-Five and Charles Bukowski’s Women. And in the end,  I ended up putting in some stylistic elements from both Bukowski and Vonnegut in the book. If you find them, I’ll give you a gold star.

In those days, Panat Nikhom, like so many small towns in Thailand at the time, had very few telephones or televisions, and certainly no Internet. These days people would think that it was very isolated. But then it felt like the center of the world and it certainly was a good place to write the book.

Working as a consultant/movie maker has taken me all over the world. When I worked in northern Laos to help the staff of the Mines Advisory Group upgrade their computer skills, they liked to keep me in the office. But once I was allowed out to watch them blow up an old bomb.

I finished writing Cambodia and the Year of UNTAC about the time the refugee processing center was closing in 1995. From there I went back to the USA, taught computer applications for a while, and in 2000 I went back to Asia, this time as a movie-maker. My lifestyle has stayed essentially the same since then—traveling around and making movies for small aid organizations or charities and occasionally doing a little consulting work.